It’s the summer season already! Beach photos are once again flooding our timelines and news feeds. This is our first summer with our Snoopy, and like most dog owners, we wanted to take him to the beach.

However, we were on a tight budget so we had to look for a beach resort that would not be too expensive. We also wanted one that is not that far from Laguna. Thanks to Google and some friends, we found out about Katungkulan Beach Resort in Ternate, Cavite, which is also known as Boracay de Cavite. Dave and Christine joined us with their dachshund Derp, who is also actually Snoopy’s best friend. Oh when those two are together, it’s chaos, and they never get tired of playing.

Needless to say, we humans were more excited for them. It would be both their first time to experience going to the beach.

We left Los Baños at 3:00 in the morning, bringing with us some sandwiches, hotdogs, marinated meat, rice, water, softdrinks, and some beer in our cooler. I could tell Snoop was confused when we woke him up by 2:30 am to go potty.

We just followed Waze and Google Maps to reach our destination. For those with motion sickness, bring your medicines. There are some zig zag roads near the resort. In fact, just when we were only 5 minutes away, Snoopy vomited. It was his first long car ride, and although he’s used to car rides, this was his first time with a zig zag path.

We arrived at the resort by 5:00 AM and there were no more parking spaces available in the near the beach. Dave had to park up the hill overlooking the whole place (awesome view by the way, photos later).

The sun had not completely risen yet by the time we arrived. Since it was a Sunday morning (and it being summer too), we already estimated that there would be a lot of people.

There were also a lot of tents pitched on the shore, and the cottages along the shore and near the parking area were already occupied. Still, we walked on until we found one.

We actually thought the cottages were free, but it turned out we had to pay PhP 500 for the whole day, which was not bad, especially if there were more than just the four of us.

After settling down, we ran to the beach with the dogs. Snoopy had no trouble adjusting to the sand, which was very fine. I had no problem going barefoot. I didn’t even step on anything sharp the whole day. The water was also very clear—Dave could even see some fish swimming.

Well, Derp and Snoop headed right for the water, but when a small wave approached them, they both panicked and stepped back. We were all laughing. Beagles after all, are not like Labradors or golden retrievers who have the love of water bred into their genes. These beagles are hunters, and they love the ground and grass, while dachshunds were born to dig, dig, and dig! 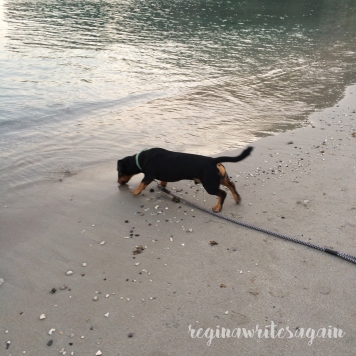 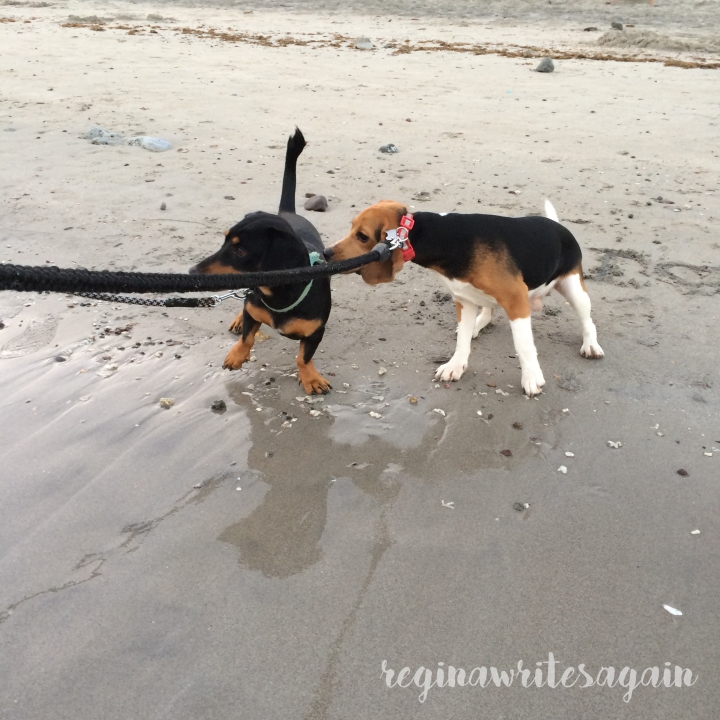 I pulled Snoopy into the water just so he could have the feel of the water on his paws. He ran towards shore and sat there instead. So I sat beside him and we observed the things going on. He likes watching people.

Derp eventually approached the water cautiously but he did not like staying there for a long time.

Eventually, we carried the dogs towards the deep part of the water then we let them go. And boy did they swim, oh yes—they swam straight towards shore. Haha! I remember a friend of mine told me that dogs have natural compasses towards the shore.

While the humans had their lunch (grilled porkchop and tomatoes and rice yummm), the two dogs kept digging. In fact, one was so deep that I fell into it and I tripped. Derp was so funny because he kept on digging a long tunnel-shaped hole. Then he would lie down there and stay for a while.

TIP: Bring lots of snacks, food, and water. Although there is a store there, there are also a lot of people. 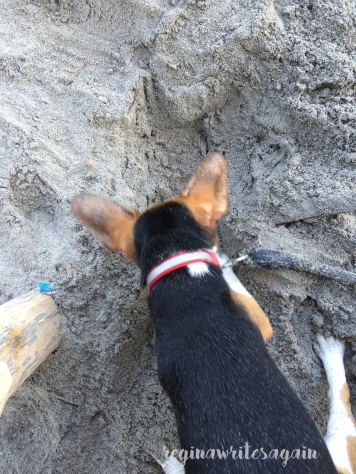 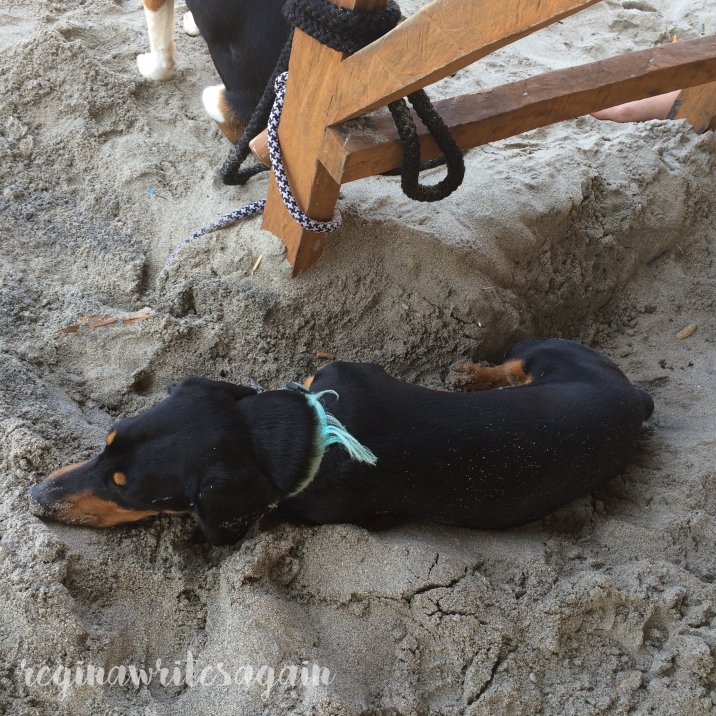 The humans left them in the cottage so we could spend more time swimming. After lunch, we took the dogs into the water again and made them swim. Derp kept on drinking the sea water. The result? Wet beagle! Haha.

WHY YOU MAKE ME WET MUM?

WHAT DID YOU DO TO ME HUMANS!

As we waited for their coats to dry and as the humans lied down on the sand for short naps, Snoopy had a reverse sneezing fit, which meant that he was having a hard time breathing. He also started drooling a bit. We were so worried but we realized that it must be because of the sand on his face. 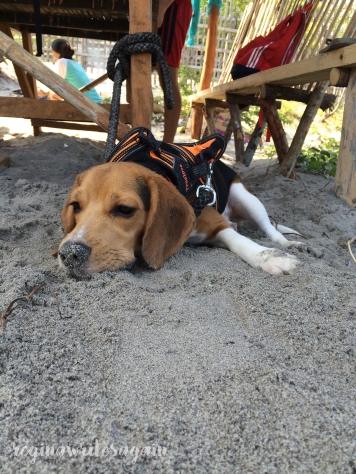 As I mentioned above, the additional parking spaces were on the hill overlooking the beach, so as expected, the climb up was tedious. There were cemented stairs, which were very steep. The dogs, excited at this new experience, ran ahead of us, which caused them, and us to be dog-tired and thirsty.

Before leaving, we took photos of the breath taking view from the top. You could clearly see the beach front and the beautiful color of the sea.

Katungkulan Beach in a nutshell:
Entrance fee: PhP 100 per person
Dogs are free to enter
No corkage fee
Free to pitch tents
Cottages for PhP 500 (day trip until 8:00 PM) and PhP 700 (overnight)
Around 2-3 hours from Los Baños, Laguna
Bring ice, food and drinks! We also brought a portable grill and charcoal.

Can’t wait to go back!

One thought on “Summer escapade with the dogs! (Budget beach trip with style)”

Hi, I'm Reg and I'm a slave to cheese and my dogs. I'm a 30-something who enjoys food, traveling, dogs, skipping, and creating content. Also, I wish we all had more than 24 hours a day.

I don’t know where I’m going but I want to get there fast 🤣
Running Man Tutorial! Hope this helps 🎉
Cool down jump—just going crazy and continuing even if I make a mistake and just having fun. 🤣
Saturday jump session.
Really need to drill those handle catches! 🙃
Favorite footwork to practice speed!

I am a content writer and strategist. I help businesses in the B2B, tech, and digital marketing industry reach their target market by creating content that provides value. Talk to me and let’s work together!

I don’t know where I’m going but I want to get there fast 🤣
Running Man Tutorial! Hope this helps 🎉
Cool down jump—just going crazy and continuing even if I make a mistake and just having fun. 🤣
Saturday jump session.
Really need to drill those handle catches! 🙃
Favorite footwork to practice speed!
Loading Comments...
%d bloggers like this: